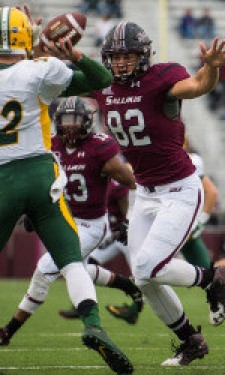 Brandon Williams is what many scouts would consider a freak athlete. He is the size of an NFL linebacker, yet at his pro day Williams ran a 4.69 40 yard dash, a time that ranks better than some receivers at the NFL Combine. ​Williams then followed that up by jumping a 37 inch vertical, which would have been enough to rank him second among all defensive lineman and fourth among all linebackers at the NFL Combine this year.

New York City, NY, April 21, 2016 (Newswire.com) - Brandon Williams is an outside linebacker that is a true steal in the draft with 1st round athleticism and size. Since his outstanding pro day many of the NFL top teams have begun to pursue him as a possible draft pick.

Brandon has spoken with coaches at the Buccaneers and the Jets, Texans, Bears, Panthers, Packers has all showed great interest in the linebacker. Watch his highlights of his pro day and his film here and notice how raw with great instincts he is with All Pro upside. His film here.

"Its rare to find an athlete like this that combines, the size, speed and athleticism to be a dominant Pro

Brandon Williams is what many scouts would consider a freak athlete. He is the size of an NFL linebacker, yet at his pro day Williams ran a 4.69 40 yard dash, a time that ranks better than some receivers at the NFL Combine. ​Williams then followed that up by jumping a 37 inch vertical, which would have been enough to rank him second among all defensive lineman and fourth among all linebackers at the NFL Combine this year. Not only does Williams have the size and the speed necessary, he also possess the strength which he showed off by repping 225 pounds 24 times on the bench at his Pro Day.

"Brandon's athleticism and size shows him to have early round ability and potential and his film matches that. He is a sleeper who people will know about shortly and not want to miss out on." say NFL Draft Bible Analyst Rick Serritella​. His amazing pro day is on display here.

Brandon Williams is a versatile athletes who has major upside and ability. He is an instant difference maker anywhere you play him on the field. With his size and speed Williams has the ability to play both inside and outside linebacker, as well as defensive end. He is a defensive coordinators dream with his natural skill which he put on display this past season by recording 10 tackles for loss and 4.5 sacks. Not only is Williams an unstoppable force on defense, he is also a special teams star. This past season Williams used his strength and speed to block three kicks, one of which he returned for a touchdown.

Schuman's National Underclassmen Combine (NUC Sports) is the longest running underclassmen event and the most respected combine and football camp in the country. Founded in 2005, NUC was formed to create a focused environment that allows freshmen, sophomores and juniors to showcase their skills and talents for college recruiters and recruiting organizations, giving each student-athlete ample opportunity to get recruited throughout his high school career, not just the spring before his senior year. Since its inception, more than 100,00 athletes have come through NUC events and more than 10,000 athletes have received Division-I scholarships after first attending an NUC event.