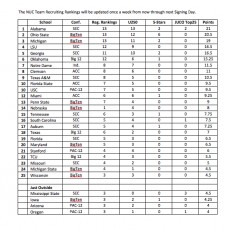 There are a couple of big changes in the NUC Sports Team Rankings this week. Alabama moves to #1 with the commitment of tight end Major Tennison of Bullard (Texas). Tennison is a Southwest Top 60 and Ultimate 250 prospect giving the Crimson Tide 1.5 recruiting points.

There are a couple of big changes in the NUC Sports Team Rankings this week. Alabama moves to #1 with the commitment of tight end Major Tennison of Bullard (Texas). Tennison is a Southwest Top 60 and Ultimate 250 prospect giving the Crimson Tide 1.5 recruiting points.

"It looks like once again Alabama is dominating the 2017 recruiting class. Nick Saban continues a trend that has been ongoing for over a decade, RECRUITING DOMINANCE."

Also making a big move is TCU. The Horned Frogs picked up a pair of Ultimate 250 receivers in Jalen Reagor, Waxahachie (Texas), and Omar Manning, Lancaster (Texas). TCU moves from just outside the NUC Sports Top 25 to #22. Reagor was previously committed to Oklahoma. The loss drops the Sooners from #4 to #6.

Dropping out of the Top 25 are the Iowa Hawkeyes who lost a commitment from Wylie East (Texas) running back Eno Benjamin.

Defensive end Donovan Jeter of Beaver Falls (Pa.) decommitted from Notre Dame, but the Fighting Irish remain at #7 though the gap between them and Clemson narrows. Jeter is now committed to Michigan. The Wolverines remain at #3 but severely cut the gap with #2 Ohio State.

Over 10,000 alumnae signed with Division 1 programs since its inception in 2005. The program started in New Jersey with 1 camp and 141 athletes has grown to over 20,000 athletes per year in over 40 states. Humble beginnings in 2005 were attended by current NFL stars Joe Haden and Tyrod Taylor.