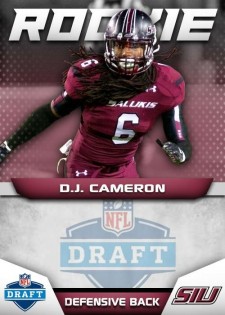 DJ Cameron has recently heard from several NFL teams as this sleeper prospect continues to rise. Most recently his agent David Schuman has gotten inquiries from several teams including Chargers, Colts, and Texans.

DJ has always overcome the doubter since HS. We expect a solid 40 from him on pro day in 4.5 range. He is the best defensive player on Southern Illinois. He was a four year starter with 257 career tackles. He displays the ability to cover very well and was one of the top cover safeties in the Collegiate Gridiron Showcase. He had 22 PBU's in his career from safety and over 10 tackles for loss. The ability to both cover and tackle is rare and required at the NFL level. NFL Draft bible has him listed as one of the great sleeper safeties in the draft and a top 10 Free Safety prospect. In his pro day you will see how he covers runs the drills and has amazing athleticism and change of direction. You can see his outstanding pro day here.

"DJ Cameron has unique skills in coverage, tackling, and play making, he will make a team and be a huge steal for a very smart GM."

After recording over 250 tackles in his career, former Saluki Safety D.J. Cameron is off to the NFL. The play-making safety has been seeing his stock rise over the past few weeks, as NFL teams are starting to see the ability he has to be a difference maker at the next level. His highlight film is play after play of outstanding play. You can see that here.

At 6' and 206 pounds, Cameron has the ability to play any position in the secondary. He is great cover safety, who also possess dependable tackling skills. He is known for being one of the hardest hitting safeties in the Missouri Valley Conference. He is a dynamic play maker who can help a defense in a number of ways. Cameron has great feet and can quickly adjust from back petal to an explosion towards the ball.  He has incredible closing speed and always seems to be around the ball. After posting a very impressive 4.14 20 yard shuttle and 35 inch vertical at his pro day, he has caught the attention of everyone in the NFL. In fact, according to his coaches each of the 32 teams in the NFL inquired at him this year.

D.J. Cameron is a productive and consistent player who possess a great motor and high football IQ. With his skill set it is no surprise to see him rocketing up draft boards.

Schuman's National Underclassmen Combine (NUC Sports) is the longest running underclassmen event and the most respected combine and football camp in the country. Founded in 2005, NUC was formed to create a focused environment that allows freshmen, sophomores and juniors to showcase their skills and talents for college recruiters and recruiting organizations, giving each student-athlete ample opportunity to get recruited throughout his high school career, not just the spring before his senior year. Since its inception, more than 100,00 athletes have come through NUC events and more than 10,000 athletes have received Division-I scholarships after first attending an NUC event.