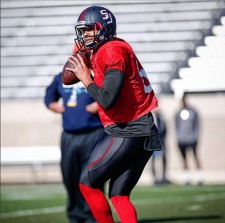 New York City, NY, April 22, 2016 (Newswire.com) - ​Michael has met with the Carolina Panthers QB coach via phone and has great interest from over a dozen NFL teams. Michael had an outstanding pro day with solid athletic numbers at 9-9 broad and 28 inch vertical. You can see his pro day here and go to the passing portion to see the laser passes he is throwing. Go here to see his Pro Day.

Michael dominated at the Collegiate Gridiron Showcase and showed his great arm and great accuracy. NFL Draft Bible has moved him up to one of the top 15 Quarterbacks in the draft and the greatest upside of many of the second 10 Quarterbacks.

"Michael will be a starting QB in the NFL if he gets in the right place and they leverage his great raw skills and give him time to develop and become a superior QB."

Eubank showed NFL teams why many consider him to be one of the biggest sleepers in the entire draft this season. At 6'5" and 246 lbs Eubank showed of his incredible arm strength, accuracy and athleticism in front of representatives from 31 NFL teams and 50 scouts.

After transferring from Arizona State, Eubank has seen his stock take off. Although he played in only 6 games this past season Eubank was able to produce multiple 300 yard games to go along with 10 touchdowns. He is a very accurate passer who shows NFL type field awareness. Eubank in his career at Samford was able to complete just under 70 % of his passes, which is an almost unheard of accomplishment. If fact, it was accomplished by only one FBS quarterback this past season. "Michael has every attribute to be a great pro QB, he is smart,works hard, and has a literal cannon for an arm," says David Schuman, Michael Eubank's agent.

About Inspired Athletes
Inspired Athletes (http://www.inspired.football ) understands the amount of hard work, long hours, and sacrifice it takes for athletes to reach the professional level. To be a part of the 2% that get to go on and continue to play the sport they love for a living is a blessing. The decision in choosing the type of representation that fits is as important as it was selecting the best college program. We are available to answer any questions for athletes and their family members and only ask that athletes keep these key values that we represent in mind – INTEGRITY, INSPIRATION, FAMILY, CHARACTER, DILIGENCE, and LEADERSHIP. Inspired Athletes offers a breadth of services to help support the player throughout his lifetime which will include his NFL career and beyond. Our goal is for the player to be a part of our family and have the opportunity for lifetime success on and off the field. Services include, Player Representation, Marketing, Endorsement & Branding, Social Management, Financial Support, Lifetime Management, Medical Services, Insurance, and Legal and Accounting.

About NUC Sports
Schuman's National Underclassmen Combine (NUC Sports) is the longest running underclassmen event and the most respected combine and football camp in the country. Founded in 2005, NUC was formed to create a focused environment that allows freshmen, sophomores and juniors to showcase their skills and talents for college recruiters and recruiting organizations, giving each student-athlete ample opportunity to get recruited throughout his high school career, not just the spring before his senior year. Since its inception, more than 100,000 athletes have come through NUC events and more than 10,000 athletes have received Division-I scholarships after first attending an NUC event.