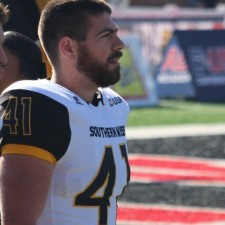 New York City, NY, April 22, 2016 (Newswire.com) - ​​​​It is not very often the football world gets excited but a long snapping prospect, but Lance Schuffert is an exception. You can see his snapping highlight real which is on display here. Lance was a first team all conference Long Snapper for Southern Mississippi.

Schuffert recently met and worked out with the Detroit Lions of the NFL for a personal meeting and workout. Lance took over the long snapping job at Southern Mississippi after his redshirt freshman season. Since then he has been one of the most consistent snappers in the entire country. Lance has also recently met with the Colts to discuss his future. At 6-0 and 231 pounds he ran a 4.88 40 on pro day and 31 inch vertical jump to prove his athleticism to make a play and block solidly where needed.

"Lance is a once in a lifetime Long Snapper, who will play for 15 years in the NFL. He is accurate, confident, and fast with his snapping. Simply put lance is the best I have seen, and have known it since he was a high school All American playing alongside Marcus Mariota, Johnny Manziel, Eric Ebron among other first rounders."

Schuffert has incredible accuracy on his snaps. He has outstanding velocity and touch which help to make him a legitimate NFL prospect. Schuffert puts his talent on display on his Instagram for anyone who may think snapping takes no skill. In this clip https://www.youtube.com/watch?v=AjWuJuxXFY8 Schuffert's accuracy can seen as his hits half court shots and picks off milk jugs like a sniper.

Lance is endorsed by many of the top special teams experts in the country including Mike McCabe and James Dearth.