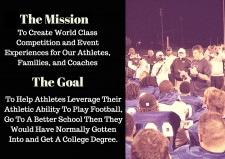 New York, NY, October 28, 2016 (Newswire.com) -  NUCSports.com and the founders of the National Underclassmen Combines have released their football camp schedule at nucsports.com. Events this year will take place in over 100 cities and 40 states around the USA. The mission is to create World Class competition and event experiences for the athletes, families, and coaches. By testing the events in the 40 yard dash, vertical jump, broad jump and shuttle run, plus its all-star games, all american games, 7v7 tournaments and position based camps, NUC sports has established itself as the true leader in the industry since 2005.

"Our goal is to help athletes at all levels from 5th grade to seniors in high school get a chance to compete, get better, and get recruiting exposure once they get to the high school levels. Once we get them in that place where they can leverage their athletic ability to get a college degree and put themselves in a better position in life, then we have done our job," says founder David Schuman, a former D-1 football player at UCONN, where he also got his undergrad and MBA. "Football helped get me in a place where i had a better chance in life after football and that's what I want for all the athletes."

"The goal is to help athletes leverage their football skills and athletic ability to help land them at a college where they can play football and get a degree from a college that they might not otherwise have attended."

Over 10,000 alumnae have signed with Division 1 programs since its inception in 2005. The program started in New Jersey with 1 camp and 141 athletes has grown to over 20,000 athletes per year in over 40 states. Humble beginnings in 2005 were attended by current NFL stars Joe Haden and Tyrod Taylor.

"It was my plan to give athletes the forum to utilize their athletic ability in football to put themselves in a position to get a college degree," says Schuman. "There is no greater thrill then receiving an email or call from an athlete telling me they are getting a scholarship or that they have an opportunity that they might not have had before. My job is to give athletes the opportunity to show what they have and then to get that information to the college coaches!"