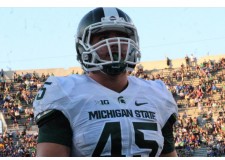 New York, NY, January 15, 2017 (Newswire.com) - Prescott is quickly emerging as the Top Fullback Prospect in The NFL Draft. In pre-draft testing he knocked of 40 reps and we expect him to be 4.8 in the 40 or better at 255 pounds on pro day and in the combine if he receives the invite.

His highlight film is fantastic HIGHLIGHT FILM  and the time and date for the game so you can watch it live online or your scouts in person. His film is loaded with punishing blocks. He is wearing #18 in the game and will be in White Jerseys. When you see the film below you will know his fantastic ability at Fullback. He also comes from great pedigree as his brother is the starting fullback and pro bowl candidate for the Minnesota Vikings.

"Its so rare when you get a huge fullback who has the agility to block todays linebackers, and has the ability to get you 1 yard and the all important goaline catch. Prescott does that better than anyone>"

Inspired Athletes Agency is a full service NFL agency and media organization focused on helping athletes get into the NFL, manage their professional and marketing initiatives and pr. David Schuman is the managing director and founder and is also the founder of NUC Media and NUC sports which is focused on helping football player reach their dreams. More can be found at iathletes.com and nucsports.com.