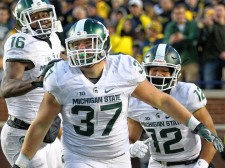 New York City, NY, April 24, 2016 (Newswire.com) - ​In today's NFL the fullback position is a lost art form. Only about half the NFL teams utilize a full time fullback. The ones that do will certainly be looking at Michigan State's Trevon Pendleton. Trevon had a tremendous pro day at Michigan State putting on a show where people had him in the range from 4.58 to 4.72 in the 40-yard dash and caught balls exceptionally well.

Trevon appeared in 49 games in his career started 28. He is most notably known for his big touchdowns against Ohio State and in the Rose Bowl against Stanford. His biggest play came against Michigan on a 74-yard catch and run to help Michigan State get back in the game. You can see his athleticism in that play on display here. Pendleton was an All-State Ohio running back in high school who was also an outstanding linebacker. ​

"Trevon is a unique player who can catch the ball and block equally well, he will contribute on every special teams in the NFL and has unique versatility. He is a can't miss player."

Says Rick Serritella of NFL Draft Bible, "Trevon is moving up the charts and challenging to be one of the top 2-3 fullbacks in this draft class. There is not a fullback in the draft with better hands and athleticism." Pendleton is known for his tremendous blocking skills and helped pave the way for dynamic Michigan State rushing attack. He possesses great hands and can make plays after the catch which you see here https://www.youtube.com/watch?v=8_pGx_zCX10. This helps to make him a complete package at fullback. On March 16 scouts gathered at Michigan State for the annual pro day, and Pendleton made sure they did not leave disappointed.

Trevon met with six teams privately post his NFL pro day. This time not only would have been faster than any fullback at the 2016 NFL Combine, but also would have been the fastest combine time for a fullback since 2005. He continued to show off his athleticism throughout the day by leaping for a 34 inch vertical, and putting up 24 bench press reps at 225 lbs. His agent, David Schuman states, "Trevon is a unique player who can catch the ball and block equally well, he will contribute on every special teams in the NFL and has unique versatility. He is a can't miss player."

#####
About Inspired Athletes
Inspired Athletes (http://www.inspired.football ) understands the amount of hard work, long hours, and sacrifice it takes for athletes to reach the professional level. To be a part of the 2% that get to go on and continue to play the sport they love for a living is a blessing. The decision in choosing the type of representation that fits is as important as it was selecting the best college program. We are available to answer any questions for athletes and their family members and only ask that athletes keep these key values that we represent in mind – INTEGRITY, INSPIRATION, FAMILY, CHARACTER, DILIGENCE, and LEADERSHIP. Inspired Athletes offers a breadth of services to help support the player throughout his lifetime which will include his NFL career and beyond. Our goal is for the player to be a part of our family and have the opportunity for lifetime success on and off the field. Services include, Player Representation, Marketing, Endorsement & Branding, Social Management, Financial Support, Lifetime Management, Medical Services, Insurance, and Legal and Accounting.

About NUC Sports
Schuman's National Underclassmen Combine (NUC Sports) is the longest running underclassmen event and the most respected combine and football camp in the country. Founded in 2005, NUC was formed to create a focused environment that allows freshmen, sophomores and juniors to showcase their skills and talents for college recruiters and recruiting organizations, giving each student-athlete ample opportunity to get recruited throughout his high school career, not just the spring before his senior year. Since its inception, more than 100,00 athletes have come through NUC events and more than 10,000 athletes have received Division-I scholarships after first attending an NUC event.