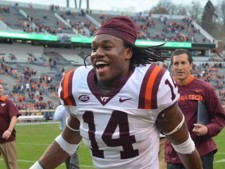 Blacksburg, VA, March 15, 2017 (Newswire.com) - ​Trey Edmunds who played this past season as a graduate transfer at the University of Maryland, returns to Virginia Tech for his Pro Day. Trey is expected to turn in a fantastic performance now that he has healed up from his season ending injury at Maryland.

Trey was a rising star at Virginia Tech before injuries had plagued some of his playing time in his career. He turned in exceptional performance against the likes of Alabama, where he rushed for 132 yards against a great Nick Saban defense. He was named Freshman Honorable Mention All American.

"Trey has amazing speed for his size and now that he is healed up and fully back, we expect him to completely wow the NFL scouts."

Trey had a great early career but was sidelined by injuries and is one of the great sleepers in the draft. He is huge with great speed and now that he is fully healthy, he can become the back he can be. He is a potential 10 year pro back. He also was a top level LB recruit coming out of high school, so he will also be a huge special teams contributor.

Trey is known to be a great athlete with size and great speed as evidenced by his 4.45 speed and also has an amazing background with his mother having been a National Level track athlete and his father being an NFL Pro Bowl Tight End. He was the high school state 200 meter champ as a prep in Virginia.

You can watch his film here .