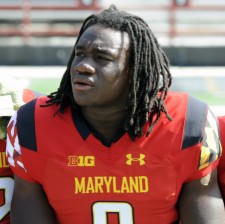 Trey was the most impressive person at Virginia Tech, and we can expect more when event gets started. Trey has meetings schedule with several teams to talk about what to expect throughout the draft.

"Trey is a true gentlemen and amazing athlete. Where else can you find a 222 pound running back that can actually run by you!"

Returning to Maryland for their pro day, reaffirms that his commitment to being successful strong.

"A fractured clavicle, broken left tibia and subsequent foot injury weren’t enough to shatter the spirits of a second-generation NFL hopeful that has only flashed glimpses of his next-level potential in the ACC and Big Ten over a period of five years as he’s now currently preparing to showcase his wares to NFL teams with his second pro day a little over a week away."